You are here: Home » About Us » Community Outreach

We recognize that as a member of the Metropolitan Washington Community, we have a responsibility to support local organizations and efforts that affect issues where we live and work. Fort Myer provides support in the form of donations of personal time and efforts, cash, materials and services to organizations such as FBI Citizens Academy Alumni Association, Washington D.C. Police Foundation, Goodwill of Greater Washington, Perry School Community Service Center, Covenant House, Fisher House, Community of Hope, and other organizations. Fort Myer believes that community work reflects on the integrity of the Company and has therefore established the Fort Myer Construction Corporation Charitable Foundation to support its efforts, as well as the charitable work of employees who also appreciate the importance of civic involvement.

The history of Fort Myer’s growth as a construction company in and around Washington, D.C., positions it to uniquely understand and appreciate the aspirations of small and minority/disadvantaged owned businesses. In its formative years, the Company was the beneficiary of small and minority contracting programs, including the U.S. Small Business Administration’s 8(a) program. The support offered by these programs allowed Fort Myer to grow from a small home improvement contractor building residential patios and driveways to the formidable presence it currently maintains in the Washington D.C. construction market.

As a local contractor that has graduated from small and disadvantaged contracting programs, Fort Myer uniquely knows the Metropolitan Washington, D.C. contracting market. Additionally, consistent with past practices Fort Myer is currently running a monthly roundtable for local DBE’s, assisting them in building and growing their businesses. Fort Myer is committed to including such companies in its work programs as subcontractors and suppliers.

Fort Myer’s organization reflects the Company’s commitment to a local residential workforce and its culture of diversity in the composition of its workforce. The Company is recognized for its open employment opportunities, as well as for personal growth within the Company. This commitment to diversity is demonstrated by the fact that well over a majority of the Company’s workforce is from minority groups, sometimes employing a number of members of the same family; additionally, the Company employs significant numbers of first and second generation immigrants. This diversity is also seen in the Company’s field mangers and in its office and professional support staff. This culture for personal betterment and advancement is apparent with the Company’s union workforce, as we believe that unions assure good wages and benefits. In many cases the entry point as a Fort Myer employee is the employee’s participation in various union apprenticeship programs, as well as Company training opportunities, where young men and women first learn the skills of their chosen trade.

Recognizing the interest of Fort Myer in employment-advancement opportunities, (in particular, the personal interest of its Executive Vice President), Mr. Lewis F. Shrensky was appointed and served as an active member of the D.C. Mayor’s Project Labor Agreement Task Force for the enforcement of the goals set for the construction of the new Washington Nationals Baseball Stadium. In this capacity Mr. Shrensky worked to promote the involvement of D.C. residents in building the stadium. In addition to providing current employment opportunities at that time, the Task Force concentrated on such employment as a springboard for future employment. The Task Force also recommended policy and program improvements for future employment opportunities for local residents.

Fort Myer’s Executive Vice President serves on the executive council of the District of Columbia Students Construction Trades Foundation nonprofit 501(c)3 organization. Working in partnership with DC Public Schools to support the Academy of Construction and Design at Cardozo Education Campus and to extend the Academy’s educational outreach programs to other District middle and high schools, the foundation strives to support student achievement, offering instructional excellence and access to internships, scholarships and post-secondary education, job placement and career opportunities.

Throughout the history of Fort Myer, the Company has been a good neighbor. The often demonstrated civic character of the Company is seen in its regular support of numerous civic associations, clubs and teams. Many games and events in the city have taken place where the’ teams and groups have worn the name of Fort Myer Construction on their shirts. Fort Myer organized and sponsored a job fair for inner city youth in conjunction with a Fort Myer sponsored basketball tournament. Fort Myer regularly participates in job fairs sponsored by the D.C. government and others. The Company contributes to improving D.C.’s school buildings and infrastructure, as well as supports the worthy efforts of Hope Housing in providing first time housing opportunities for residents of Washington. The Company has also been recognized for its support of Fisher Houses where returning injured military reside while they recuperate and rehabilitate from their wounds. 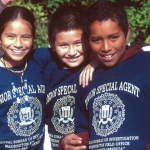 Fort Myer is also proud of its support demonstrated by the personal involvement of its President, Jose Rodriguez, in organizing and supporting the FBI’s Citizens’ Academy Alumni Association of Washington, D.C. This community charity is recognized for its important role in helping inner city school children reach for new horizons. As stated by Ms. Sue Shumate, President of the FBI Citizens Academy Alumni Association of Washington, DC:

In addition to the thousands of dollars Mr. Rodriques has raised or contributed to support the school activities, he is also known for being generous with his time. He never misses a graduation ceremony or a local event and he is a frequent guest speaker for the school programs. He offers a compelling message about the value of education, discipline and positive choices. His incredible life story of a young man who immigrated to the US with the few dollars in his pocket and who became the successful leader of a major corporation provides the students with hope and inspiration. Many have written thank you letters expressing their gratitude for giving them opportunities they never thought possible.

To say that Mr. Rodriques is a community champion is a vast understatement. He is a man of vision and dreams. He is a man of compassion and action. Through his work and with the support of Fort Myer Construction Corporation, the children of our community have been given opportunities to change their future.

Fort Myer has demonstrated over its 45 years in business that it is the type of company that makes a good community partner, good business partner, and good partner in the construction industry.

For over 45 years, Fort Myer Construction Corporation has provided career opportunities enabling employees to develop and enhance their talents and skills. Visit our Employment Page to review current job openings. 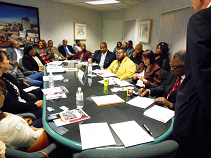